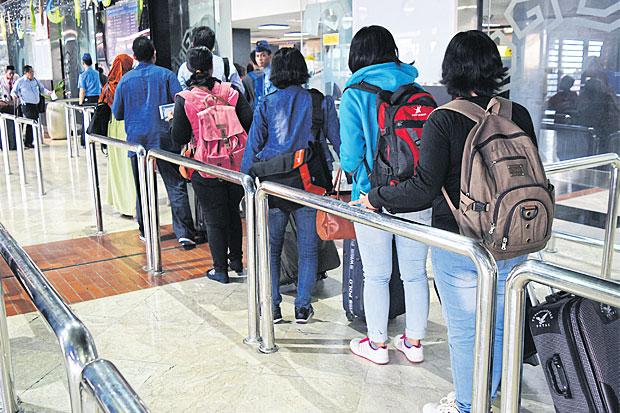 Tyas Weningsih Putri left her village in Kendal, Central Java in August 2016 to try her luck for a second time as a migrant worker in Malaysia.

She had been recruited to work in a birds’ nest processing factory and expected to receive 900 ringgit per month, as stated in her contract.

There were 152 other women who left with her to work in Malaysia. But she soon sensed something was not right when she found that things were not the same as written in her contract.

“I became suspicious that there was a legal violation when I received my ID card. The address stated was in Shah Alam, but the factory was in Klang. I knew it was not right because I had worked in Malaysia before,” Ms Tyas told Asia Focus.

Her salary was also deducted whenever her supervisor spotted a mistake or when she took sick leave, and she ended up receiving only 200 to 400 ringgit on her payday.

She had no idea that she and the other 152 women, as well as three from Myanmar, had become victims of human trafficking until Malaysian authorities raided the factory in March 2017.

Ms Tyas said at first she was surprised and relieved by the raid, thinking that help had finally come. But she was in for another hurdle when she was sent to jail for two months for an immigration violation because the address on her ID card was not the same as the factory location.

“We were told that we were victims of human trafficking but the police told us that we still had to go to jail for the immigration violation, even though it was the company’s fault,” said the 24-year-old, who now works for a garment factory in her hometown in Indonesia.

She and her fellow workers were released from jail and immediately sent home in May 2017.

“I was still handcuffed when they took us to the airport. I was released only after my baggage was checked in,” she said.

Ms Tyas was one of 1,083 victims — including five minors — of a human trafficking network that Indonesian police cracked last year. It had supplied workers to Malaysia, China, Egypt, Saudi Arabia, the United Arab Emirates and Syria.

Sixty percent of the victims were bound for the Middle East. Another 39, who had been promised work as domestic helpers in Saudi Arabia, were repatriated from Kuala Lumpur in May after they were abandoned by their recruiter, said Cmdr Gen Ari Dono Sukmanto, the head of the national police criminal investigation unit.

The latter group departed from Surabaya for Pontianak in West Kalimantan and then travelled overland across the border into Sarawak on peninsular Malaysia, after which they flew to Kuala Lumpur.

“They were stranded in Kuala Lumpur airport for two days until our embassy personnel picked them up. It turned out that they were going to Saudi Arabia using a pilgrimage visa instead of working visa,” Cmdr Gen Dono said.

The traffickers travelled via Malaysia because Indonesia’s 2015 moratorium on sending migrant workers to Saudi Arabia and 20 other Middle Eastern countries was still in place. Still, it is common for Indonesians to use pilgrimage visas to travel to Saudi Arabia to look for work.

“So the recruiters made them detour via Malaysia to make the workers’ trip look less suspicious,” the commander said.

Indonesia and Malaysia share a porous 2,000-kilometre land border in Kalimantan that makes movement of people difficult to monitor. Entering Malaysia via Entikong is a common practice among human traffickers, according to Lalu Muhammad Iqbal, director for protection of Indonesians abroad at the Foreign Ministry.

“They were recruited to work in Saudi Arabia but then they were transferred to conflict-torn countries like Syria or Iraq,” Mr Iqbal told Asia Focus.

Gen Tito Karnavian, the national police chief, said the force handled 92 human trafficking cases involving transnational groups in 2017, but that was down from 212 the year before.

The 2017 Trafficking in Persons Report issued by the US State Department lists Indonesia, Malaysia, Brunei, Camobodia, Singapore and Vietnam in Tier 2, which means they do not fully meet the minimum standards of the Trafficking Victims Protection Act (TVPA) but are making significant efforts to bring themselves into compliance.

The Asean Convention against Trafficking in Persons (Actip) was signed by the region’s leaders in 2015. It is non-binding but is expected to promote closer cooperation and collaboration among members. Brunei is the only Asean member that still hasn’t ratified the instrument.

Wahyu Susilo, the director of the advocacy group Migrant Care, said the Indonesian cases highlighted how vulnerable the country’s migrant workers are to rights violations.

What happened with Ms Tyas, he said, also highlighted “discrimination in enforcing the law” by Malaysian authorities, since the young woman and her colleagues still had to serve time in prison for being undocumented.

The Indonesian moratorium has also been ineffective as Migrant Care has found that the flow of migrant workers to the Middle East continues.

“In January and February 2017, Migrant Care received a report that there were about 300 female workers who were kept in confinement in Riyadh,” he told Asia Focus. “Most of them were from West Nusa Tenggara and were sent there when the moratorium was still in place.”

The moratorium was imposed following the beheading by Saudi Arabia of an Indonesian woman convicted of murder. But it only triggered an opportunity for human trafficking syndicates, apart from also violating citizens’ rights to move freely to work, given the high demand from destination countries and the high supply of Indonesians willing to migrate for better jobs abroad, he said.

He added that as long as the kafalah system, a visa sponsorship that ties migrant workers’ legal residency to the location of their employers, remains in place, the Middle East would remain an unwelcoming destination for migrant workers.

“The government has to respond to this by negotiating for bilateral agreements and demanding the destination countries in the Middle East to enforce better protection for migrant workers and abolish the kafalah system,” Mr Susilo said.

“I hope the workers can go there again for the good of both countries,” he said, adding that Indonesians were preferred in his country since most are Muslims and are quick to adapt to what their employers want. By ISMIRA LUTFIA TISNADIBRATA